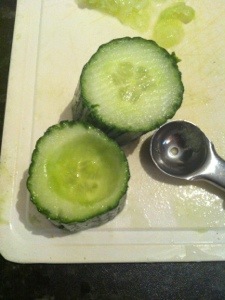 Are you looking for an easy way to get kids to eat veg?

Here’s a little activity that will keep little hands active but also see a couple of cucumbers disappear quite quickly. 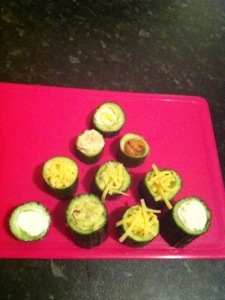 Cut 2 cucumbers into chunks and scoop a small amount of the inside out using a melon scoop so the cucumbers can act as pots. Replace this with a healthy filling of choice such as low fat cheese, hummus, peanut butter, or any low fat dipping spread.

Cucumber itself is reported to have many health benefits. For example it has been suggested its high fibre content aids with digestion so it can help with constipation in both children and adults. Cucumber is also said to contain sterol which helps with the reduction of cholesterol. The large amount of water contained in a cucumber helps in rehydration. Good for those who don’t drink enough fluids. The consumption of fruity vegetables such as cucumber has also been reported to help with Asthma in children (Paediatric Allergy and Immunology. 18, pages 480 to 485. (September 2007))